GameMaker Studio is a comprehensive video game development platform that allows you to build games in a straightforward and intuitive manner. 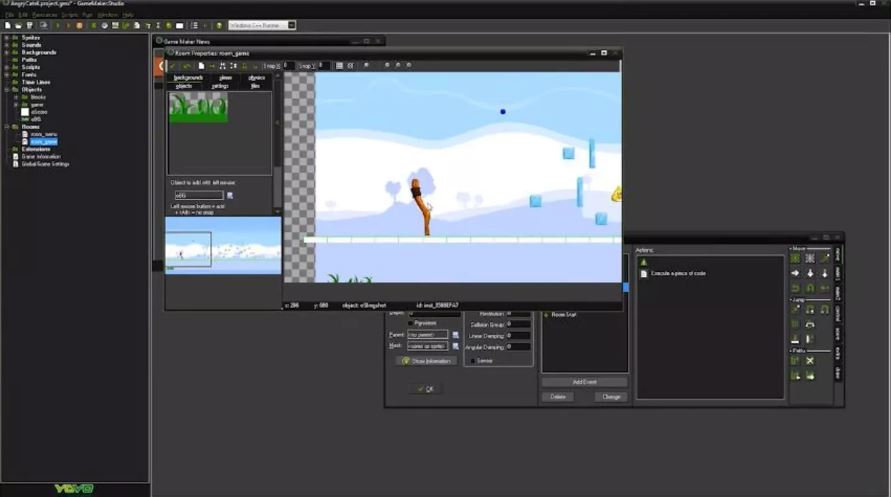 GameMaker Studio is a multi-platform videogame development tool that can export projects to Windows, Mac, iOS, Android, and HTML 5. The latter three, on the other hand, would only be included in the app’s paid versions.

The software has a very user-friendly interface that allows us to handle all phases of the creation of our video game using a ‘drag and drop’ philosophy that eliminates the need to know a complex programming language in order to make a professional game.

Even so, it has its own integrated programming language (the so-called Game Maker Language), which allows us to construct complex routines and algorithms when the simple tools fail.

The GameMaker IDE Studio helps us to create a variety of 2D games, as well as three-dimensional worlds. It is possible to build games of almost any genre by enabling such extensive customization of game elements.

All it takes is a little patience, a few simple algorithm design bases, and a lot of creativity.

GameMaker Studio differs from the previous edition, Game Maker 8.1, in a number of ways. ‘Studio,’ for example, comes with its own physics and collision engine (BOX2D).

The ability of this version to publish our game on any of the many distribution platforms and operating systems available is probably the most significant difference between the two programmes.

GameMaker Studio is a comprehensive video game development platform that, despite its extensive list of features and capabilities, allows you to build games in a straightforward and intuitive manner.